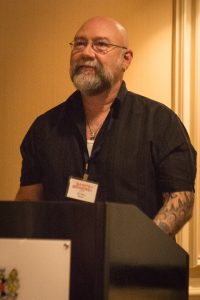 In April 2016, I had the pleasure of speaking at Marshall University in Huntington, West Virginia.

On the 11th I gobbled dinner with my favorite drag queen, Miss Ilene Over aka sociologist Okey Napier, at Hillbilly Hot Dogs in Lesage, West Virginia, and then served as a respondent for a presentation on LGBTQ literature in Appalachia given by Marshall professor Dr. Allison Carey.

On the 12th Okey, Allison, and I had tasty spaghetti at a Huntington institution, Jim’s Steak and Spaghetti House, and later that day I gave a reading on the Marshall University campus.

The next morning, I spoke to a great group of students in an Appalachian literature class before heading home.  The Krispy Kreme in South Charleston, West Virginia, was a pleasant stop along the way.  I treated myself to two doughnuts, coffee, and a new baseball cap (a mountain boy can’t have too many), this one camo with the Krispy Kreme logo.

Several days later, I got to read at East Tennessee State University in Johnson City, Tennessee, an event sponsored by the Women’s Studies department there.  They put me up in a very nice hotel, the Carnegie (a place I’d highly recommend to anyone visiting Johnson City) and Hilary Malatino, the Assistant Director of Women’s Studies, took me out for a fine Thai meal with some local scholars, teachers, and students.  The reading itself was very well attended:  nearly 100 people.

Jeff would love to visit your campus or organization.  He is available for readings, workshops, and panels.  For more information email him.