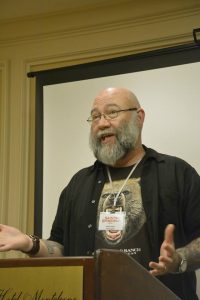 On March 23rd, I flew down to New Orleans for one of the highlights of my year, the Saints and Sinners Literary Festival.  I’ve attended it every time it’s occurred and wouldn’t miss it, since it’s one of the few venues in which I feel appreciated as a writer.

The Hotel Monteleone (Tennessee Williams’ favorite New Orleans accommodations) was the host hotel, so I settled into a room on the 14th floor, high above the French Quarter noise, and then had a great dinner with my husband’s brother Robert and his wonderful wife Thana, who were coincidentally in town for a few days.  Robert kindly treated us to raw oysters and broiled oysters at Desire Oyster Bar, and of course I had to have a few Sazeracs, my favorite Big Easy cocktail.  My old friend Cindy Burack—a political theorist who teaches in the Women’s Studies department at Ohio State University—got in late from the airport, and we caught up a bit before bed.

On Friday, Cindy and I had a fine breakfast at Desire.  I highly recommend their fried green tomatoes topped with poached eggs and crayfish hollandaise, with grits on the side.  Then Cindy and I took the St. Charles Avenue streetcar out to the Garden District, where Cindy took some great photographs in Lafayette Cemetery #1 (a place featured in Anne Rice’s fiction). 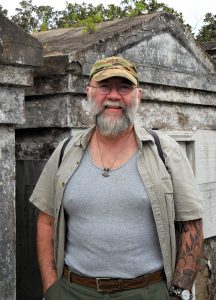 That evening we attended the SAS opening reception at the Gallier House, “Glitter with the Literati.”  I sucked down a few Stella Artois and chatted with N.S. Beranek, whose first novel, Angels Fall, I blurbed last year.

Afterwards, Cindy and I hastened back to the Monteleone to pull on dress clothes, since we had a dinner reservation at my favorite New Orleans restaurant, Galatoire’s.  I will freely admit to being a country boy who detests wearing dress clothes, meaning that I almost never wear a tie, meaning that, without the help of my husband, I fumbled with my damned tie for nearly fifteen minutes before finally getting it knotted right.  But the fashion annoyances were worth it, because the service at Galatoire’s was top-notch, as it always is, and the food was excellent too.  Cindy and I split an asparagus and hearts of palm salad and an order of fried eggplant, served with powdered sugar (I know that sounds odd in this context, but it really works), Tabasco, and Béarnaise sauce.  Then I battened on crayfish Yvonne with some caramel custard for dessert.  Ah, culinary delights!  We bears are profound hedonists.

I was pretty busy on that Saturday the 25th.  As part of the 10 am “Saints and Sinners Reading Series,” I read a funny section of my latest novel, Country, in which a high-femme lesbian cusses out a homophobic preacher.  What made that reading experience most memorable was that Amie M. Evans and Cindy Burack were also reading as part of that series, and they were the inspirations for two of the characters in the scene I read.

After a quick lunch at Napoleon House, I moderated a panel, “Home Is Where the Art Is: or Is It?”  The panelists—Martin Pousson, Martin Hyatt, Sheila Morris, and Rich Barnett—all told moving stories about their native places and the difficulties of being LGBT in those areas.  Finally, I spoke as part of another panel, “Choose Your Fetish:  Writing the Erotic in Fiction, Poetry, and Genre Literature.”  This panel was moderated by Cindy Burack, and Rob Byrnes, Jameson Currier, and Deb Curtis were my fellow panelists.  That evening, after a party launching the new anthology, Saints and Sinners 2017: New Fiction from the Festival, I took Cindy, Amie, and Paul J. Willis, the festival organizer, out to dinner at Rémoulade, where I devoured seductive Cajun meat pies. 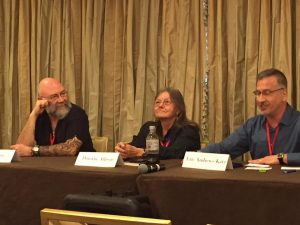 Sunday, for me, was a high point of the festival:  Dorothy Allison and I were interviewed by Eric Andrews-Katz in a session called “Inside the Writer’s Studio.”  The description of this event in the SAS program book was wildly flattering:  “Southern writers are often a class unto their own.  They are known for their writing styles and eccentricities as much as for their colorful personalities.  Join Eric Andrews-Katz for a discussion with two giants of Southern writing culture, Dorothy Allison and Jeff Mann.  Find out about their writing process, unique perspectives and inspirations, and much more with this intimate interview.”  To be paired with Dorothy Allison, whose wonderful work I’ve admired for years, was a great honor!  The interview went very well.  You can watch it below or by using this link:  https://www.youtube.com/watch?v=tCHJuTzIWgA


At the closing reception on Sunday afternoon, I introduced Louis Flint Ceci, who was inducted into the Saints and Sinners Hall of Fame.  Then Cindy and I headed out for one last Crescent City feast, this time at the Court of Two Sisters, where barbequed shrimp and fried oysters were passionately devoured.  Monday, feeling reinvigorated, I flew home to my husbear and cats.

If you’re an LGBT writer, I can’t recommend Saints and Sinners highly enough.  It provides a supportive environment, great panels and readings, and a sense of belonging that’s very hard to find for most queer authors.  Here’s the website:  http://sasfest.org/