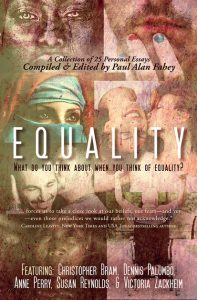 Several years ago, I responded to a call for submissions and wrote “Thomas,” an essay that appeared in The Other Man:  21 Writers Speak Candidly About Sex, Love, Infidelity, and Moving On.  It was edited by Paul Alan Fahey and published by JMS Books (Glen Allen, Virginia) in 2013.  Working with Mr. Fahey was a pleasure, so when he invited me in the spring of 2016 to contribute an essay to his new anthology project, I was glad to oblige.

On Martin Luther King Day 2017, Vine Leaves Press, located in Melbourne, Australia, will be releasing that anthology.  It’s called Equality:  What Do You Think About When You Think of Equality?  My essay, “Two Mountain Weddings,” discusses the importance of marriage equality, gives some details about my wedding(s) to my husbear, and mocks the politically correct millennial language police.  The book also includes fine essays by some of my favorite LGBT writers, such as ‘Nathan Burgoine, Jewelle Gomez, Jeffrey Ricker, Felice Picano, and Rob Byrnes.