This month, we are featuring some of Jeff’s work in erotica – particularly his BDSM-themed work.  This blog post discusses his novel, Fog, which was published in 2011 by Unzipped Books, an imprint of Lethe Press.

The cover from the Lethe Press edition says: 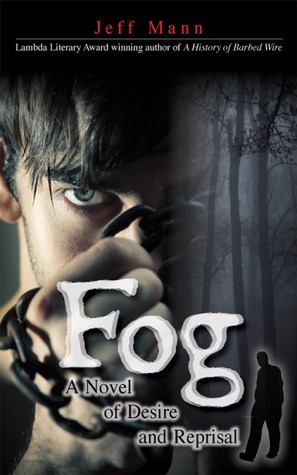 a plan of revenge, kidnapping the handsome son of the man who wronged one of them. Al, the accomplice, has stalked Rob for weeks, and his infatuation for the young man has grown deeper than he ever anticipated. So much so that he finds himself drawn to protect Rob from the rage and vengeance burning away his partner Jay’s insides. Caring for their bound and gagged captive, with each passing day Al finds his power over Rob a potent and irresistible aphrodisiac and his heart dangerously moved. But Jay has no intention of ever allowing the young man to escape.

‘Nathan Burgoine, author of Light, says, “I can’t recommend this one highly enough. It’s dark, yes, but it’s just so damn poetic and beautifully written that even the cruelest moments are stunning.”  And finally, a Goodreads reviewer put it like this: “”His writing is AMAZING, captivating, addictive and sooooooo INTENSE.”

So, if you’ve not read Fog yet, what are you waiting for?  You are missing out on one of Jeff’s classics!  Head over to Lethe Press today and get your copy.  In fact, it is on sale!